If there is one rose whose loss to our collection I mourn the most it is this ground-breaking introduction from the German rose breeder, Dr. Franz Hermann Müller. Müller is best known in America for his popular Rugosa hybrid, Conrad Ferdinand Meyer, a hefty, tall growing rose with large and very seductive rose pink blooms.

Müller worked throughout his breeding days on bringing the brilliant coloring of Rosa foetida into new hybrids with the roses of his day. Overshadowed by the popular introductions of Joseph Pernet-Ducher, Müller's "Pernetiana" Gottfried Keller actually preceded Pernet-Ducher's first great introduction, Soleil d'Or. Certainly the impact of Pernet-Ducher's work is not diminished by this earlier German hybrid. Many of Müller's creations were purchased by Jules Gravereaux to add to his great collection at l'Haÿ-les-Roses in France, including one named in honor of Gravereaux's own special circle of rose friends, 'Les Rosati'.

To preserve this rare and lovely variety is to preserve a story that makes our knowledge more accurate; cherishing this honors Dr. Müller's life's work with roses. But above all I love the flowers, broad peach-apricot bowls that fade to buff veined pale orange. They are nearly single, often with wisps of small petaloids curled round the golden stamens. The plant is small, slender of stem and difficult to keep well foliated.

I believe that this rose has vanished completely from US gardens after its brief 5 year appearance in our collection. Roses like this need to be sought out again and added to the history we preserve. I hope that soon some collector will appear with the wherewithal and desire to continue the flow of rare old roses to this country.
Posted by Gregg Lowery at 11:46 PM 2 comments:

I am fond of plum purple. At its most dramatic this rose is dark purple, darker at the petal bases, feathering up towards the edges, with tiny buff stamens. The flowers are small, just two inches across, the leaves slender and ferny and small. In our sandy soil the plant rarely reaches more than two feet, but suckers about creating a fuzzy nest of slim stems thick with needle thin prickles. This is the habit of the Scots roses which colonize the soil creating drifts of upright branches tipped in flowers in early May here. The texture is soft in the garden and not at all what is expected of a rose plant.

Tiny cups of claret purple continue for weeks and in the summer or sometimes the autumn they reappear. Rarely though do I see an abundance of hips, small, round, glossy wine-black fruits that are the special stuff of the Scots roses. Like elderberries, or the somber black berries of ivy, they hold one in their thrall---black fruits, plum purple flowers...

What is old in a rose? There are many yardsticks of time, and some lovers of old roses are quite particular about when a rose was introduced. The twentieth century troubles them. But none who browse through our garden would look and see something modern in Doorenbos Selection, though it was introduced by the Dutch nursery of the same name sometime around 1950. That was the year I was born, so for me it is old, and growing older.
Posted by Gregg Lowery at 7:04 AM 2 comments: 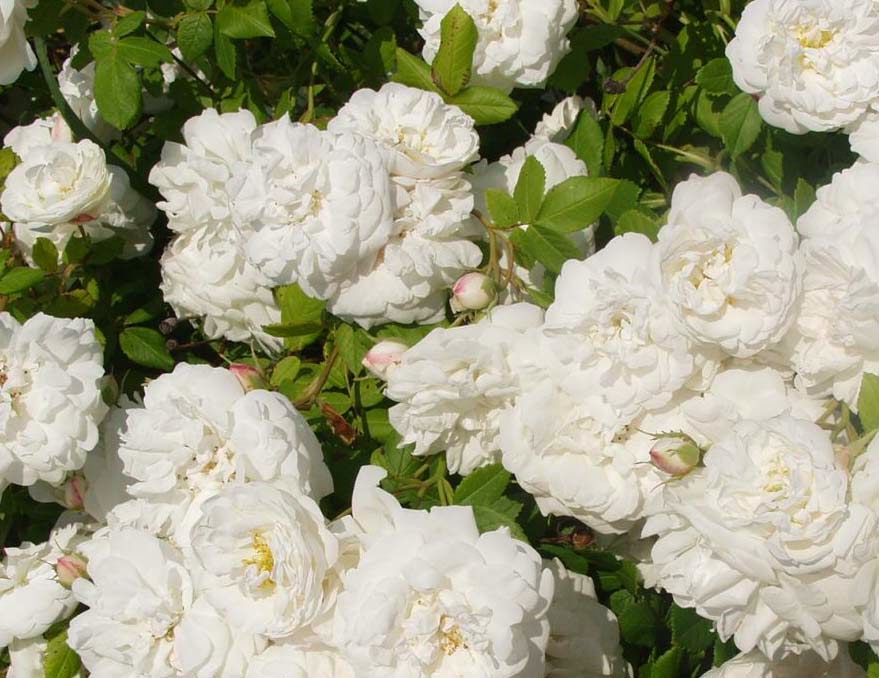 It is inevitable that we are asked what is our favorite rose. From one who truly loves roses the answer comes not; there is no absolute favorite. Yet inching high up on the list for me is Mme. Plantier. Vita Sackville-West extolled its virtues in her writings, and planted it in the orchard at Sissinghurst Castle to scramble up a very old apple tree to rain down with fragrance. And so in our garden it scrambles up a hundred year old Gravenstein apple, hanging over the front gate which I must open and close each time I come or go. The scent is delicious, of musk and damask rose, greeting me daily in late May and June. It inspired the planting of other things that also waft their scents on the air; Itea illicifolia rich with honey in high summer, the old Chinese Sacred Lily Narcissus that marks the end of each year and the start of the next, and the rare old Hydrangea species, H. scandens, with marbled leaves and white flowers scented of spice and herbs. The front gate is a good place to greet visitors.

Early in my years of gathering rose cuttings from cemeteries I encountered many old relics of Mme. Plantier. In my disappointment over failing to uncover some rarer beauty I nearly lost sight of how special this rose is. Laden with delicate small flowers, it is ever generous and kind, with apple green stems that are nearly thornless. I have often wondered about its origin. The Hybrid Chinas are an old group that marked the first crossings in Europe of once blooming Gallicas and Albas with the garden roses of China, the Teas and Chinas. Was it, as so many speculate, a Noisette seedling, like so many hybrids of the early 19th century? Did an Alba rose contribute the white coloring and smooth stems? I trust that genetic research will some day unravel this mystery.

Posted by Gregg Lowery at 8:18 PM No comments: